Welcome to Elephant Cave located on the west side of the village Bedulu, Blahbatuh Gianyar. Goa Gajah name which was written by the masters in the palm Prapanca Kertagama State in 1365. This cave -shaped letter ''T'' with a statue of Ganesha is considered the god of science and thought to date from XI century.

Goa Gajah is built on the edge of a cliff. The meeting between a small river where the water then flows into the river Patanu. So that the flow of these two rivers is called ''Campuhan'' and is seen to have magical value, the hermitage has build. Reliefs carved on the front wall of Goa Gajah is a sculpture that resembles a mountainous landscape with a variety of trees and animals indicates that hermitage in the mountains with forest ebat with a variety of animals, this is the same as in the Hermitage Kunjarakunja in South India. 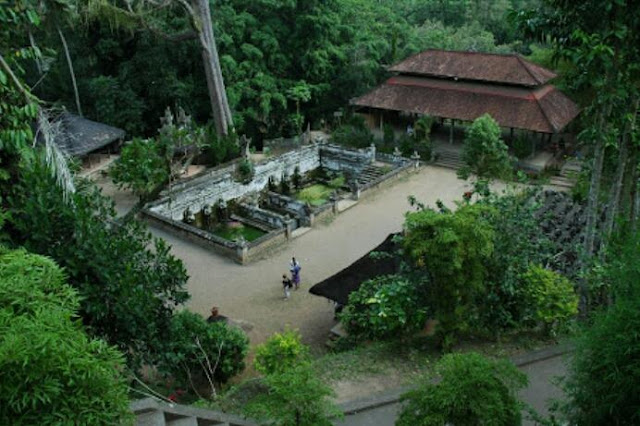 Goa Gajah Temple antiquity owned, can be seen from the Archaeological Heritage. In the courtyard of the Pura Goa Gajah Kuna are pertitaan 12 x 23 m2, divided  into three chambers. North room there are three statues in shower and walk-in shower arca south there anyway, while the middle of the chamber there are only a need statue. Around the cave there also a pool with seven statues Widyadara pertitaan- Widyadari who was holding the holy water. It is said that the seven shower this as in important symbol of the seven rivers and highly regarded in India as well as trust land Balinese Hindus. Various historical in the cave and the elephant is still maintained to this day, proving the seriousness of the government and its citizens to keep the preservation of the cultural heritage of their ancestors.

Cave complex and baths are on the west of the region Patanu. While in the east can be found the natural cave and types pof Buddha statues and sculptures stone cliffs, has largely fallen on the edge of the river, due to the occurrence of the earthquake. Visit this historic site, visitors must climb a few dozen stairs.