Her name is Dirgin Julian Ann , a 38 years old women vagrant with her dog around Bali local resident . When local peoples asked here name she said '' my name is Corona ".

She and her Dog begin begging in Canggu area ( Perum Canggu Permai ) , one of the local resident in Canggu . She knocked peoples houses and asking for cigarette and seems depressed .Residents reported to police that the woman eventually found an empty garage and sat down. 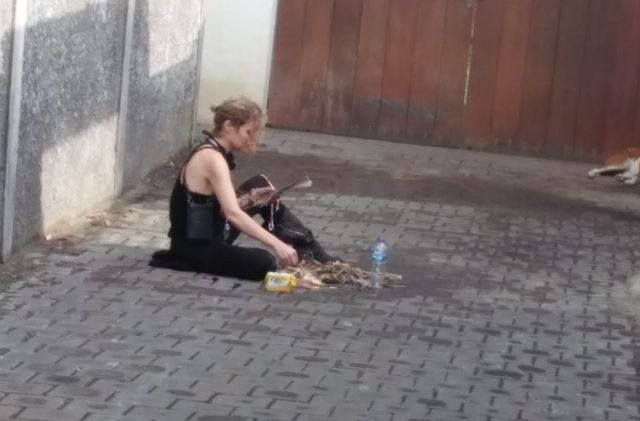 Head of PP Badung Pol I Sat Gusti Agung Ketut Suryanegara explained, the Canggu police department  had secured the Caucasians on reports from local residents. "The foreigner and his pet dog are in front of the empty house gate. When approached and persuaded to stay overnight at Police office North Kuta Sector Police, he did not want to, "said Suryanegara.

When approached by one of the residents, Caucasians had asked for cigarettes and given by residents. "He also banged on the door of the empty house, and when asked the name and origin, he did not want to tell," said Suryanegara.

After being persuaded by one of the residents to leave the place, the Caucasians who were suspected of being depressed finally wanted to follow the officers. "He was willing to be escorted to Police station . He also carries dogs and suitcases. At 23.00 he was secured at Police office , "he added.