Bali is known as the ''island of a thousand temples'' because on this island there are more than 11,000 building temple. That said, in some places in Bali, the number of temples and even exceeds the number of homes.

One of the biggest temple which is considered as the mother temple in Bali (the mother temple) is Besakih. Besakih temple is located in Kaki Gunung Agung, the highest mountain on the island of Bali which the local people regarded as a sacred mountain. On march 17, 1963 (another version says March 18) Mount Agung erupted and killed more than 1,000 people and damaged the surrounding villages. But that fascinate, Besakih 'untouched' by the natural disaster, but the distance is only about 1 km from the summit of Mount Agung.

According to the story develops, the location of the temple have been considered a sacred area. In the ancient Javanese language, Besakih, Wasuki, or basuki meaning ''congratulations''. In addition, the name of Besakih was also associated with the Dragon Basuki. the figure of a dragon that becomes part of the public confidence on the slopes of Mount Agung in the pre-Hindu. Hence this temple is considered as a holy place, then the visitors who want to enter the temple complex are required to wear gloves Balinese. 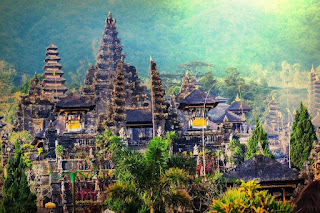 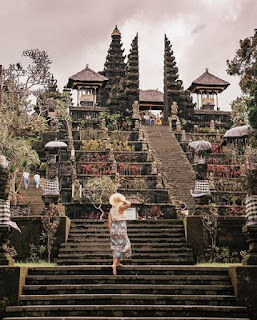 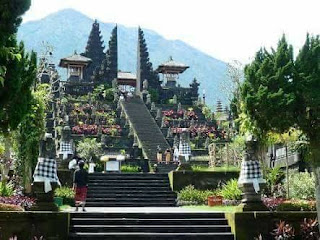 Besakih is a complex of Hindu temples which consists of 22 building temple. According to estimates by experts, the development process Besakih take over 1,000 years to reach its present from. Evidence of past history megalithic relies found around this temple complex, such as mentors, stone throne, and strengthen structure of the pyramid-shaped terrace that estimate.

This temple is built on the concept of Tri Hita Karana, the concept of balance between man, nature and God. Structuring the temple building adapted to the direction of the wind so that the structures can represent nature as symbolism of the balance.

Each direction of the wind is called a mandala with the ruling deity called ''Gods Chess Lokapala''. As the center (pivot/center) of the four cardinal directions are Penataran Besakih, the biggest temple dedicated to Shiva surrounded by pretending to others. To the east there is Penataran Dark Temple used to worship the god Iswara; to the south there Pura Kiduling Kereteg to worship Lord Brahma; on the west side is Ulun Kulkul to worship the god Mahadewa; and on the north side is the temple Batumadeg intended to worship Lord Vishnu.
In the complex Besakih often held assorted Hindu rituals culminating in the celebration of one hundred years each Besakih called Ekadasa Rudra (last done in 1979). In addition to enjoying a relic of history, distinctive architecture, as well as the celebration of religious rites in the temples, tourists can also equip excursions to climb Mount Agung.