Welcome to Kerta Semarapura Gosa in Klungkung Bali is one of the famous tourist destinations in Bali and many visited by tourists every day. Kertha Gosa is located in the heart Semarapura and the name was taken from Sanskrit which means Peace Kertha and Gosa from Gosita means announcement. Thus, the meaning of Kertha Gosa is a building in the from of Bale for the king who serves as a place to announce the legislation, jurisdiction, penalization etc, Kertha Gosa building is very unique and full of high artistic value, so this place is a unique place for visit in Bali.


Kertha Gosa is in place to Visit in Bali

As a former kingdom, fair if Klungkung has many relics which in now tourist attraction. One is the Taman Gili Kertha Gosa, Klungkung Semarapura cultural heritage palace. Kertha Gosa is a building (Bale) who is part of the palace complex of buildings Semarapura and has been built around the year 1686 by the founder of the first holder of the throne of power and the kingdom of Klungkung Ida I Dewa Agung Jambe.

Gora kerta consists of two buildings (bale) that Gosa and Bale Bale akerta Kambang. Called Kambang Bale because the building is surrounded by a pond that is Taman Gili. Uniqueness Kertha Gosa with Kambang Bale in on the surface of the ceiling or ceiling bale is decorated with traditional paintings of Kamasan style (a village in Klungkung) or puppet style that is very popular among the people of Bali. At first, the paintings that adorn the ceiling of the building was made of cloth and parba. New since 1930 replaced and built on top of the plasterboard and then restored to the original picture intact until now. As cultural heritage palace Semarapura, Kertha Gosa and Bale Kambang enabled to hear the case and place where religious ceremonies are especially yadnya cutting teeth (mepandes) like sons and daughters of the king.

Kertha Gosa was also once functioned as court hall that during the Dutch colonial bureaucracy in Klungkung (1908-1942) and since the appointment of indigenous officials became head of the kingdom of the Klungkung (Ida I Dewa Agung Klungkung State) in 1929. in fact, the former supplies the court in the form of chairs and tables carved wood and paint wear prade still here. The objects are evidence of indigenous heritage of traditional institutions such as the courts ever apply in Klungkung in the colonial period (1908-1942) and the period of Japanese occupation (1043-1945). In 1930, the restoration of a painting ever done puppet contained in Kertha Gosa and Bale Kambang by the artists of Kamasan Painting. Restoration of the last painting done in 1960. 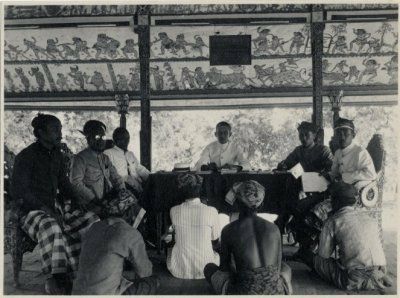 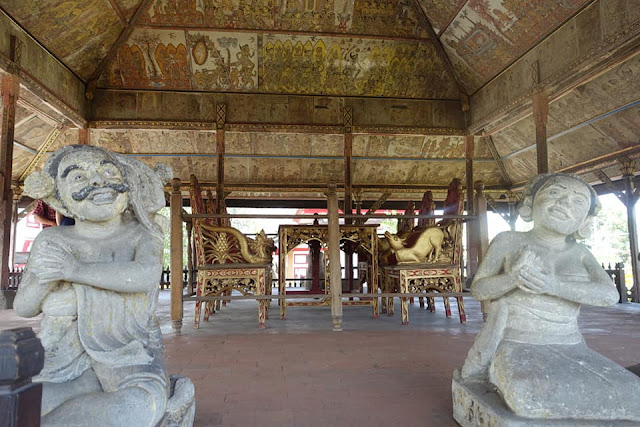